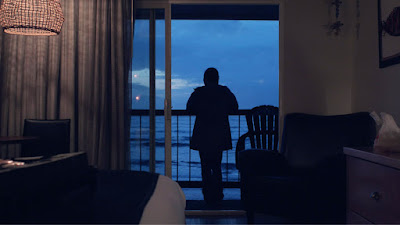 When you see małni—towards the ocean, towards the shore do so in a darkened theater, r in these covid quarantined says- in a darkened room at home. You’ll want to do this so that there are no distractions, so that you can listen to the hypnotic sound and fall into the stunning images. If you do that then you will find yourself deeply moved.

małni (pronounced: moth-nee) is a nominally a documentary, I would prefer to call it a docu-essay that follows Sweetwater Sahme and Jordan Mercier as they travel across the landscape of the Pacific Northwest and contemplate the origin of the death myth from the Chinookan people in the Pacific Northwest. It is not only a physical journey but an emotional and spiritual one.

You will forgive me if I don’t say a great deal about małni. It is not because there isn’t a great deal to say, there is, but more this is a film that requires the people discussing it to have seen it. Audiences need to experience it and then discuss it. This is not a flippant remark, more that there is a great deal to take in, much of it on an emotional level. If I discuss how the opening images of the film are married to the music what I am going to say is going to be purely my reaction. How you react is going to be something different. This is the way that many sequences in the film will play out leaving each audience member feeling slightly differently than every other.

What I will say is that małni floored me. I was not quite ready to be sucked in and carried along. I did not expect to be moved by the film the way I was. For me this was one of the best films I’ve seen playing at Sundance. It is a film I am hoping will show up at festivals through out the rest of the year so I can talk to friends and family who see it.

Do I think that you will be moved as deeply as I was? I think some of you will be. I think some will not simply because this is not a film for all tastes. That said I do think that it is a film that will delight anyone who wants to engage with a piece of cinematic art. Whether you like it or not I think you will be forced to ponder it and discuss it, and hopefully share it.

A magnificent trip of a film małni—towards the ocean, towards the shore is highly recommended.
Posted by Steve Kopian at March 29, 2021