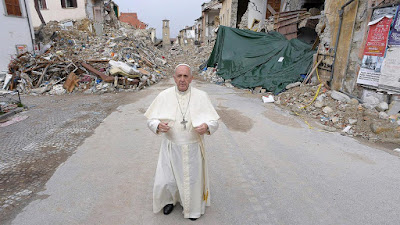 Portrait of the Pope and his thoughts on matters beyond the spiritual in today's world. Covering matters of the environment, immigration and poverty the film seeks to explore the depth of the Pope's concerns and showcase his place as a humanitarian working for the good o all mankind

Good if a bit preachy and hagiographic look at the Pope as being more than just a man of God but a man of the people. Full of lots of news footage and talking heads the film is a lot of people telling s what a great guy His Holiness is. There is no doubt that he is great guy but I would have liked prefered a short sit down with the man himself rather than than two hours of his greatest hits. To me this was really good but after awhile I began to lose interest as this seemed more like an infomercial.

As I said this if good but a tad over long.