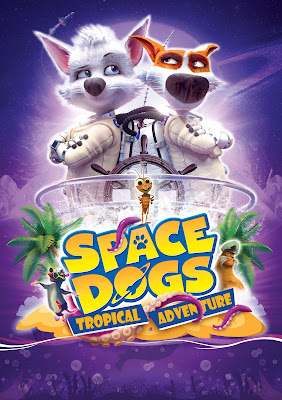 SPACE DOGS: TROPICAL ADVENTURE has Belka and Strelka recalled from space to deal with a weird whirlpool anomaly in the Atlantic.

I really liked the first two films in the series so when the chance to review this third and supposed final film in the series I jumped at the chance. While the films aren’t the pinnacle of animated art they are damn fine and entertaining family films that actually work for the whole family, adults included.

This time out the series has started to show a bit of wear. While still containing some great set pieces  and some funny lines, everything doesn’t hang together as well as in the earlier films. We can see how the plot was constructed, and while the film is still very entertaining it still feels as though it’s been put together for the money more than the love. While that might hamper most other series in this case the film still entertains and unless you are a fan of the earlier films, like myself odds are you won’t notice a thing. In truth this film is entertaining enough that if this is your first trip to the well you are going to want to go visit the earlier adventures.

What can I say I had a good time so SPACE DOGS: TROPICAL ADVENTURE is recommended.