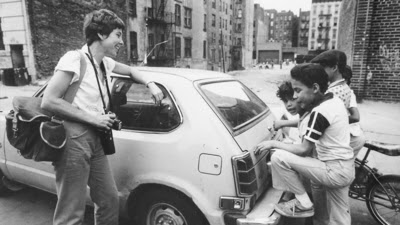 At seventy-five years old, pioneering photojournalist Martha Cooper hasn’t slowed down. Whereas many her age might content themselves with a quiet, leisurely retirement, Cooper spends many of her nights running with gangs of balaclava-wearing street artists graffiti-bombing subway stations, train cars, and neighborhood lots. While her associates are armed with cans of spray paint, she has nothing but a camera, merrily snapping away at their illicit creations before piling along with them into a getaway van. It’s the thrill that motivates her, the thought that she could be thrown in jail for associating with so-called “public vandals.”

But she’s no rote thrill-seeker; she’s been doing this for decades, having traced the rise of graffiti culture at its New York City roots throughout the 1970s and 1980s. Her 1984 collection of subway car graffiti (co-authored with Henry Chalfant) entitled Subway Art has been called the “graffiti bible,” a moniker we hear more than once from breathless admirers throughout Selina Miles’ documentary on Cooper’s life and work Martha: A Picture Story. As Miles follows Cooper throughout the streets of Berlin, New York, and her adopted home of Baltimore, she’s constantly recognized and stopped by fans proclaiming her work as life-changing—how she vindicated their generation of street artists by seeing their graffiti not as vandalism but as vibrant self-expression from disenfranchised youth; how Subway Art exposed American street culture to an international marketplace of artists thirsty for public art for the masses instead of drawing room art for the wealthy. And to these devotees Cooper politely smiles, nods, and asks if they’ve seen any of her other work. Invariably, they never have. So she breathes a little sigh, smiles again, and walks away.

This is the heart of Miles’ film and what elevates it above the realm of rote biographical puff piece: Cooper’s unease with her celebrity and discontentment with only being recognized for a fraction of her career. As a freelance woman photographer in the male-dominated publishing industry of the 60s, 70s, and 80s, she amassed a cavernous archive of photos from around the world that has largely gone unnoticed: portraits Japanese tattoos, a history of a gentrifying Baltimore neighborhood, etc. But few have seen them and just as few care. But still she creates, and this is what keeps her whole in the face of disappointment. The lesson here is irreplaceable.