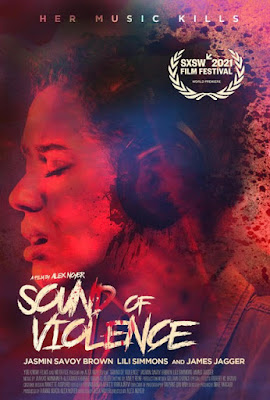 When Alexis was ten she regained her hearing in the aftermath of a family murder. Two decades later, as she works at a college and works on her experimental music Alexis finds she is addicted to the sound of violence since it triggers a physical reaction with in her.

For the early part of its running time SOUND OF VIOLENCE is a deeply disturbing film. The story of a young woman chasing her own sort of high it takes us into places most films have never done before. By placing a seemingly normal young woman at the center of the action the film asks us to ponder the various things we all do to get an endorphin rush. Films don't usually give us young women, especially young woman of  color, as killers in the realm of Hannibal or Jigsaw. They are victims not perpetrators. I was bothered because all my years of cinema going had me thinking one way.

Unfortunately as the film moves along, and especially into the second half things get out of control as director Alex Noyer jumps from real world violence and into the realm of Jigsaw from the SAW franchise. Noyer missteps as he gives us musical kill machines that are just suddenly there and an ending that is completely off the WTF table.(And he never explains how she could afford or have to build these machines of death when she is poor and always pressed for time) Nover makes a series of really bad moves that takes the stunning early turns and throws them out the window. What was a unique and brilliant horror film becomes a silly badly done retread.

As much as the second half disappoints SOUND OF VIOLENCE is might be worth a look, if only for it's use of an unexpected killer and a chilling first third.