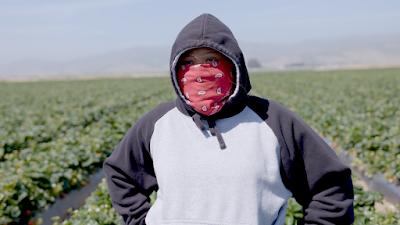 FRUITS OF LABOR is a great film about the daughter of immigrant farmers struggling to finish high school as ICE raids increase  in her neighborhood, threating her family and her desire to go to college.

I really loved this film a great deal.

This is a wonderfully a typical film that isn’t like similar films which tend to be a bit distant and more about issues than people. FRUITS is firmly about the people, with subject Ashley Solis listed as a writer on the film. The result of this is we fall in love with them with everyone on screen because the film is structured to give us an emotional connection to everyone. Normally films like this aim for a cinematic distancing and objectivity that keeps us outside of the events, but  the FRUITS crew does the opposite, they lean into people they are documenting. In doing so they open up our hearts to not just Ashley and her family, but to everyone on screen and everyone who is living a similar life.

Documentaries ideally need to do more than just show us life, they should connect us to it and make us feel things emotionally. However FRUITS OF LABOR doesn't just connect us to life and make us emotional, but rather it makes us feel and become part of the life on screen in ways that few films of any type ever do. We are there with Ashley. We are going through the things she goes through to the point where by the time the film ends we truly feel as though she and her family have become part of ours.

In a weird way I feel like this is not a film but a family album, a record f the things we did together, despite never having met before.

Highly recommended FRUITS OF LABOR is one of the unexpected joys of SXSW and a must see.