Nightcap 3/28/21 Superheroes on the big screen 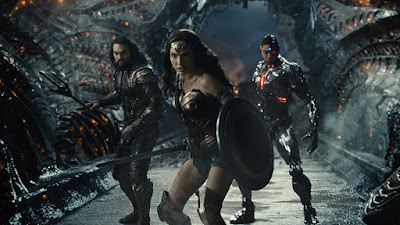 Over the last few weeks people have been either loving or hating the Snyder Cut of JUSTCE LEAGUE.  Some people love the seriousness and some people hate it.

What I am intrigued by is how a number of people I know who love the mythic nature of some comic stories are dumping all over the film because it is attempting to do the same thing. I find it funny because I have a suspicion that some of them would have loved the film if it had been a comic first.

I'm not going to go into the film here, rather I just want to point out that for better or worse superheroes on the big screen are really silly. Yes we have gotten some good superhero films but bringing them to life- putting them into the real world ultimately doesn't work. The heroes and villains are so removed from reality that the only way to get them to work is to animate them, which is why most people I know hold up SPIDERMAN INTO THE SPIDERVERSE as the best superhero movie ever made simply because it is closest to the movies can come to be like a comic book.

Alternately the only way to get live action versions to work is either remove the costumes as in BATMAN BEGINS or lean into the unnatural nature of them like the Tim Burton Batman films. You can't have costumed people running around it looks stupid, which is why the X-Men films made fun of it and then didn't attempt it until the series was well underway when  you could accept that world as real. (I could kind of argue that the WATCHMEN TV series pulls it off except that in order to get it to work it has to set the story in an alternate time line)

Additionally you can't do real violence in a superhero film or else you end up with the distasteful violence of SUPER or the Batman as killing machine we see in BATMAN VS SUPERMAN. (And yes I was okay with it because Batman started out killing people).  And while I am not a huge fan of BVS I do like that the film makes painfully clear the cost of what a super powered battle would be. Yes the Marvel films kind of deal with that, the DCU films meet it head on and see it all as a kind of  repeating 911 (which I know pissed off some people who don't want to think about the cost to regular people and property).

The problem with superhero films now is that it seems unless it's a lark (DEADPOOL) or what is essentially a grand pantomime of tropes (the Infinity War films) where you pluck the heart strings of fans you can't get any love. No matter what you do some one is going be upset, more so if you try to tell a story without any  humor. And god forbid you use them to tell mythic tales.

But weirdly the mythic tales are what people love about the comics. From Grant Morrison's rethinking of the Justice  League to Alan Moore's exploration of everything people eat the stories up. On the other hand live action attempts to do the same seriousness kind of fall flat.

I should pause here and make it clear that in saying this I am not saying any of the films are bad, more that they never are fully real, despite everything they do. As much as say BLACK PANTHER shines on so many different levels, even to the point of addressing social wrongs, the film never is fully real, even though we want it and T'challa to be.

The reason that superheroes don't work well on the big screen is that in order to make them work we have to suspend too much belief. Sure it can sort of work with one super character (say in CHRONICLE) but once you push it to more than that the ripples of unreality ripple though the tale and pull it from any notion of reality. The only way to make it believable is, as in WATCHMEN the TV series, to make it an alternate realty, but that still keeps it distant. We simply know that people can't fly.

Having had discussions with a few people who hate JUSTICE LEAGUE the talk always spirals down to the thought that superhero films aren't that good. The reasoning is generally the story/characters isn't like the comic. Where I can agree that in some cases that the plotting is wrong (The end of SUICIDE SQUAD is a complete mess)  or in others the filmmakers mess up the basic tenants of a character (Superman killing Zod in MAN OF STEEL) I largely can't go along with the outright thought they got  things wrong where we we either are faced with characters that have gone through almost a century of iterations ( both Batman and Superman) and survived or don't take into account that what works on a comic page isn't going to work on a big screen when the characters are made flesh.

Similarly outright depictions of myth, unless they are animated or reduced down to human levels, tend not to work on the big screen regardless of whether they are comic related or not (for example Hercules films are very silly).  JUSTICE LEAGUE is taking brickbats  for trying to be too mythic and too over done, but if you look at many comics, especially the Justice League comics under Grant Morrison  he expressly and overtly tuned the group into myth. If you can't accept that you are getting epic myth making going in you are doomed not to like the the film from the first frame.

Personally I take my superhero films with a grain of salt. While I love some, I enjoy most and I dislike others. I know my feelings for the films are always tempered by the fact I know that they are only movies. I rarely take them seriously or as anything more than just a shadow of their source.

In the last week I read a couple of takes on Justice League that had me roaring with laughter as the writers shifted their views of the film shifted taking them to task for from deadly serious works of myth and violence, to calling them dismissively books or films for children and not at all serious and then flipping their point of view to bash something else. Which is it? And why not admit you have a chip on your shoulder going in.

BATMAN BEGINS - the rare superhero film that woks in a real world context. (The other films in the cycle being a mess with the Joker being too rational and the the plotting of the final film in the series being an abomination)

AVENGERS- it causes a wave of nostalgia in all the small pieces.

ADDENDUM:
The best superhero movie I've seen is not a true comic book superhero movie. Its K-20 a crazy ass film from Japan that is the superhero film we always wanted but never knew it existed.

And after reading some funny tweets about the violence in Justice League- particularly bemoaning the fact Wonder Woman effectively kills a lot of bad guys in front of a little girl, I may have to do a longer dedicate piece on violence in comics films and just movies in general.

However for those curious about some of my thoughts, here is an old piece on that exact subject.

My thoughts on the new JUSTICE LEAGUE will be up tomorrow

And now some random bits:

NEIGHBORING SCENES, the annual survey of New Latin cinema starts on Wednesday. Normally I would run a curtain raiser, however I am behind in everything including watching the films. While I have seen a couple, it isn't enough to discuss what shape this year's festival will be.

I will be presenting a bunch of reviews tied into Ovid.tv's offerings for April in the next few weeks.

Some of you may have noticed that my review of SUPER FRENCHIE as been pulled. They changed the release date and I was only informed after it posted. It will return in June when the film is finally released.