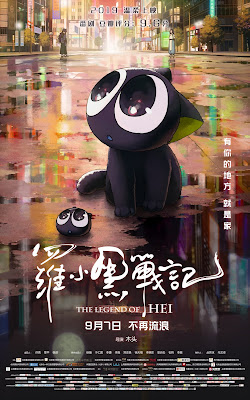 THE LEGEND OF HEI  is a mix of realistic, Ghibli-esque and cartoony designs in a tale of a bunch of guardians fighting against an evil foe.  Hei a shape changing supernatural being. He hooks up with a band of other beings like himself, nominally to protect the forest from invasion by evil humans and other beings. Of course everything is not what it seems, as Hei finds out. It isn't long before this has moments where it seems like Studio Ghibli's characters have been dropped into a combat film.

As good as some of the designs and set pieces are, I'm mixed on THE LEGEND OF HEI over all.

Based upon a hit TV series that has spawned spin offs in various other media, THE LEGEND OF HEI is an origin story of sorts for the series (although one thing I saw said this is a re-invention of sorts).  And that is one of problems with the film.  Despite the fact that we are carried along by the images and the motion, there was always a sense that seeing this as a stand alone we are missing something. It had a feeling that gnawed at me until I did some research and discovered the series.  Reading on it I found that it filled in details of characters I thought were missing. While we are fine not knowing the back stories, having them improves the film. We know who some of the characters who flit by are.  To that end a couple of posts on various sites pondered how this was going to play for people who don't know the series or can't get the references to the myths, legends and stories it is lifting from.

The other problem with the film is that even without coming from another source, the film doesn't so much reference other animated projects so much as steal from them. The Ghibli references are so blatant that the only way not to see them is to wipe your brain from ever having seen any Ghibli films. I kept waiting for a Totoro to pop into one of the battles. There are merciless lifts of other cartoon and animated characters as well. And while the battle sequences have Chinese references in them they are largely the sort of thing that fill many animated series from Japan. As good as much of this is on its own terms, the lifts get in the way since we try to come up with hat it is borrowing from.

Ultimately though the question is how is THE LEGEND OF HEI on its own terms? If you can get past the fact its a spin off and lifts things from other sources, how is it? Truthfully it isn't bad. It delights the eye, moves at a good clip and has several sequences that truly impress. If you like animation that moves and keeps you interested until the end this film is for you.  Its a good enough film that anyone looking for another bit of "anime" for fall for is going to be delighted.

ADDENDUM: As I was tweeting the link to this piece I realized tat in a way this is a kind of near great film that just missed because we never get a sense of who some of the characters are.  If we knew the characters, especially some of the fleeting ones this would have been better. I say this because there are are few times when its clear the filmmakers are only playing to fans of the show.