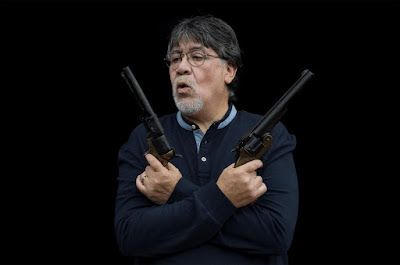 LATIN NOIR is a killer documentary. This is an hour long look at crime fiction, noir, in Latin American countries such as Cuba, Mexico, Argentina and others.  The genre took hold in the 1960s with the rise of dictatorships and authoritarian regimes across the Americas.

In countries where you could not criticize the government without risking death, crime novels were a way to say everything was not well. Because the genre didn’t always have a happy endings and was always riddled the corruption the writers could write tales that came very close to reality. They were never really questioned despite the fact that they were needling their masters all along.

This film is a stunner. It is one of the best literary documentaries I’ve ever seen. It not only reveals way more about crime fiction than my college literature class on the subject, it does so with such skill that you want to buy every damn book mentioned. Seriously I watched the film the first time in completely enraptured, and then I watched it again to write down all of the authors (Leonardo Padura (Cuba), Luis Sepúlveda (Chile), Paco Ignacio Taibo II (Mexico), Santiago Roncagliolo (Peru) and Claudia Piñeiro (Argentina)) and book titles mentioned so I could see about ordering them if they are in English.

I love this film a great deal. I have been having a conversation with several friends who love noir  and crime novels since I saw it. I am also looking to get a copy down the road after it’s festival run s because even on its own terms its just so much fun