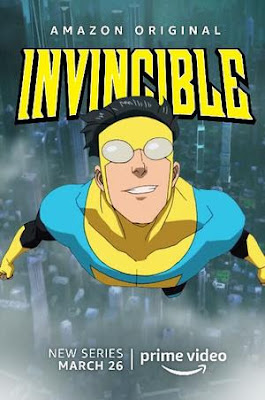 Based on the comic book by Robert Kirkman, INVINCIBLE is the story of Mark Grayson. He is the son of superhero Omni-Man. As the series begins Mark is a just a regular high school kid. However that doesn't last long as his super powers kick in. Things take a turn for the worst as an accident takes out some  heroes and there are questions about his father's morality.

Never having read the comic I don't know where this fits in the realm of superhero comics. I'm not sure how much of this story was influential on other films and programs but coming in the story seems like its borrowing from other stories. Things like SKY HIGH, SUPER, THE BOYS and any number of other superhero properties all came to mind while watching it.

I know one of the reasons I'm not a huge fan of the series is that there are long digressions. The series opens with a long discussion between secret service agents at the White House. It goes on for about five minutes with no immediately clear reason, and when it is made clear much later in the episode, the discussion mirrors the relationship that Mark has with his dad, you realize it didn't need to be that long. And that's a problem with several scenes in the 3 episodes I screened the desperately needed editing. Frankly I like the idea of long episodes in a series because it allows for things to grow, in the case of INVINCIBLE, the 40 plus minute episodes are much too leisurely and unfocused.

While never bad, INVINCIBLE never really grabbed me. I kept wanting things to not digress. I was so unimpressed with the 3 episodes that when I was done I had no interest in continuing past them.

I suspect that your mileage will vary.

(FULL DISCLOSURE-In the interest of helping you judge if you will like the show consider  I really dislike Kirkman's WALKING DEAD comic-having read 100 or so issues,. And I find the TV series incredibly silly and the sort of thing that has me constantly asking "but why...")