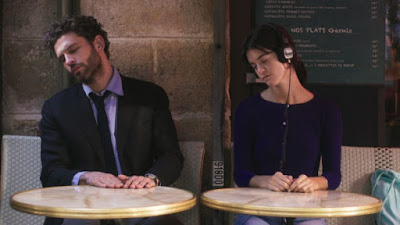 Okay the title of this post is a misnomer, this is going to be less a curtain raiser and more a pointer. Things have happened and in order to get this piece up I have to change things up.

What isn't changed is the fact that Thursday night this years edition of RENDEZ-VOUS WITH FRENCH CINEMA starts. This is the annual look at French cinema hosted by Film at Lincoln Center. Last year the series had to be cut short because of Covid and the theater closing. That really killed me because last year it produced some of the best films of the year, which is par for the course for the series.

This year the series is virtual which means the series can't be stopped.  What I love about this year's fest is the fact that the films are playing  for several days and you can watch them any time with in their proscribed time period. This means you don't have to rush to see all the good films.

And normally at this point I'd list all the great films you absolutely must see. The trouble is that just as I was starting to do this piece I was sent a stack of screeners so I while I've seen a few films I still have a good number of films yet to see. I will say that RED SOIL is really good and I am very curious how you will react to SPRING BLOSSOM which uses dance to express a deepening relationship.

I have seen LIFELINES however I am not going to review it. It is nothing to do with quality, it is all to do with my not having anything to say other than its good after two passes by it.

That's about it for now. I'm ging back to the viewing room and watch some more films. I suggest that you go to the Rendez-Vous Website and pick out some movies

Email ThisBlogThis!Share to TwitterShare to FacebookShare to Pinterest
Labels: Rendezvous with French Cinema 2021