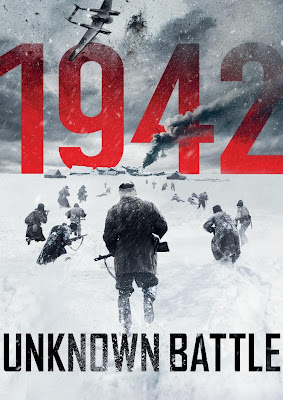 1942: UNKNOWN BATTLE is about part of the battle of Rzhev. The battle was 15 month long series of battles  that became known as the Rzhev Meat Grinder because when it was done the casualty list for the Soviets was close to 3 million soldiers killed, captured, missing or wounded. The number of Germans isn’t known but it was at least a million and a half men. The battles kept the pressure on the Germans and prevented them being able to throw all their men into Stalingrad and other locations.

Set during the early days of the battle film focuses on a company of men who attack and take a small village. It is really just a loose collection of buildings. As then men assess their situation and prepare for a counter attack the men scrounge for food,  tend the wounded and dispose of bodies. As the commander tries to sort out what the next move is he is confronted by his political officer who is trying to tow the party line and a new young and untried officer who wants his and the party orders followed to the letter. As they skirmish with the Nazis the commander has to try and figure out how to keep his men alive.

One of the more brutal and seemingly realistic war films I’ve seen, 1942 has a lived in quality that I have not seen before. Men freak out, they emotionally break and are not all gung ho.  There is a sense of death hanging over everything. We don’t know what is going to happen to them since the opening ten minute battle makes it clear that we are not in Hollywood. Anyone can die at any minute. I love those 8 minutes because the film  slowly flips expectations and subverts the typical movie tropes by killing characters dead.

Not to put too fine a point on it there are moments and sequences in this film that are quite simply among the best depictions of war as a lining hell of shit I’ve ever seen. I mean that since watching the battle sequences my attitude was I hope I never see how close this is to reality. Bravo.

While the film does have certain amount of nostalgia  for the good old Soviet days ( a problem with many recent Russian films) it is also a scathing indictment of the politics that gets injected into the fighting. As I said party officials are running around trying to keep the party line towed.  We watch as the good of the men is cast aside in the name of the party plan. While there is a military reason for the callousness of the “generals” we are very aware that the sacrifices being made by the men is a waste.

As good as most sections of the film are, the film at times wobbles. Its not fatal, but there are times between the fighting when things become a bit too run of the mill. We have what might be considered cliché interactions between some of the soldiers. I have no doubt that the reasoning is to have it act as a short hand because of the large cast, but it slightly disappoints if only the film really works at no being your typical war film.

Quibbles aside 1942 still kicked my ass. This is not a happy film and the ending maybe a glorious shot but it is a bittersweet one that broke my heart.

1942: UNKNOWN BATTLE is out now on VOD and home video.