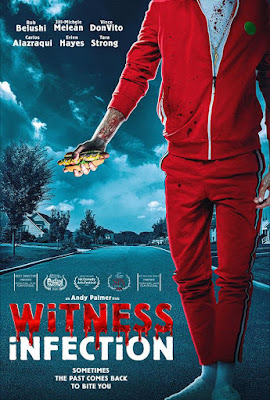 Two mafia families in witness protection  end up in the same town. As they try not to kill each other and survive the appearance of flesh eating zombies.

Low brow comedy horror film is better than you would expect it to be. Genuinely funny, more so if you come from an Italian family,  you'll laugh yourself silly Sure there are some scare but mostly there is the humor and the wonderful sense of family.

I liked the film so much that I watched it a second time with my brother Joe, Unseen Films resident zombie expert. His attitude was as follows

" This film is dumb as dirt, toilet humor, but some times that's what the doctor ordered. there are some good laughs, especially if you undertsand the Italian family stereotypes. What can I say it moves, it's short, it's dumb, it's crude and it have some laughs. More laughs than Zombieland. Worth a watch. "