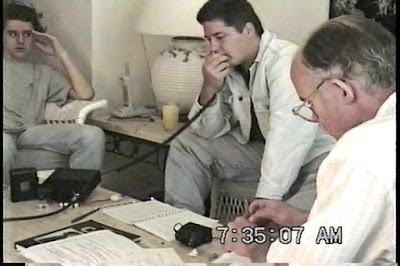 Director Miles Hargrove takes the video footage he shot 25 years ago documenting what happened when his father Tom was kidnapped by FARC guerillas in Colombia. We watch as the family refuses to deal with the police, many of whom were corrupt and likely to steer things toward their own ends, and take on hostage negotiations with militants on their own.

If you saw the Meg Ryan and Russell Crowe film PROOF OF LIFE then you saw one form of this story. However that version was based on and article on the incident and the book that Tom Hargrove wrote which was based on the diary he secretly kept. This film is made up entirely of the footage that Miles shot of the steps the family took to get him back.

And at this point I need to ask a couple of questions which will determine if this film is for you.

Do you want a film with earth shattering and shocking twists and turns every couple of minutes? If so  then look elsewhere. This is not a film about twists and turns, rather it is about one family doing what has to be done to get a family member back and the events that played out over the course of a year.

Did you ever wonder what it really takes to get someone back minus the Hollywood soundtrack and rapid cutting? Did you ever want to see what it is really like from the tense discussions and long dull periods of waiting (at one point discussion break off for eight weeks) Then this film is for you. This film documents all the things it takes including the dangers faced in going it on your own way as well as the need to distract yourself during the long periods of down time.

MIRACLE FISHING on its own terms is a very good film. It is a film that beautifully lays out what a situation like this is really like. While  there is no doubt that this is not how things would play out in other parts of the world, I can't imagine other kidnappers being willing to play a chess game a year long, this film beautifully explains what it's like to become part of a nasty business in a corrupt country. Director Hargrove's footage from that year puts us in their home in Columbia and reveals the anxiety and anguish this inflicts on the family in away that a film of just talking heads and stock footage would never have managed.

And as good as the film is my reaction to it was that this was not my cup of tea. To be certain it is a well told story but there was a point about half way in where my interest began to wane. I needed something more to grab me than a slowly evolving story that seemed to playing out in real time. It seems like almost every detail was covered, other than those that might get someone killed even 25 years on (they won't say how they got the ransom) and while some of the details are nice I don't know if we need see everything we do. I think the material might have been handled a bit more objectively by someone other than Miles. In many ways this is a love letter to his parents (it is dedicated to them) that was formulated through a lens of nostalgia which took the edge off for me.

On the other hand I know a number of people who are going to eat this film up. I know many people who will fall into the "you are there: footage and delight on being a fly on the wall. These are the people who are going to take me to task for not accepting the film for what it is, a more or less straight forward telling of events, and wanting it to be something it wasn't.

As I said above this is not my cup of tea, however I know that he film is good enough that  if the subject matter intrigues you even a little it is worth taking a look.
Posted by Steve Kopian at March 25, 2021