Sheep Without a Shepherd (2019) hits VOD and DVD on Friday 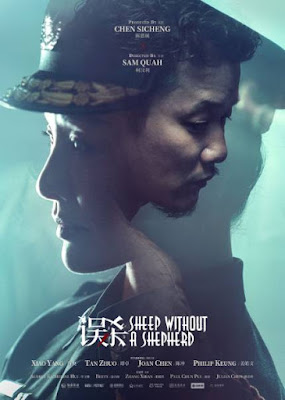 I'm going to do this review in two parts . The first is going to be spoiler free review. The second I'm going to talk about something regarding the film that might give something away. If you don't want to know just read part one. If you don't care and are willing to risk it then read the whole thing.

SHEEP WITHOUT A SHEPHERD is a great thriller. A twisty and turny film it pits a movie loving man whose daughter accidentally kills the son of powerful family when he tries to blackmail her with a video. Using things he learned at the movies he plays a cat and mouse game with the police.

If you love great thrillers this one is for you. It's a largely edge of your seat thrill ride that will keep you wondering until the end.

At this point one more word of warning....

As much as I like this film it comes with a really huge problem which made me deflate at one point because I suddenly realized how the film was going to end. Mind you it wasn't a plot point, or anything related to the film. Hell, this film is as tightly plotted and breathlessly paces a film as the come. No, the problem with the film is that it was produced in Mainland China which means it's subject to their censorship laws and strict (more or less) guidelines about stories.  Among other things stories are supposed to reflect the greater good, which means you know the way the ending kind of has to go, even if the filmmakers kind of bend things a little bit.

In all seriousness I was going crazy watching this film. The suspense had me bouncing in my seat because I had to know if things were going to come out alright for our hero. No there is nothing wrong with how the film ends, but knowing where a film you can't out think is going to end up took a little bit of the shine off the film.

I'm sorry, I don't care if the Chinese government has to have things go their way- life doesn't do that and it really wrecks top shelf mysteries.

Regardless of my bitching SHEEP WITHOUT A SHEPHERD rocks. It's a must see film and is highly recommended.
Posted by Steve Kopian at March 22, 2021