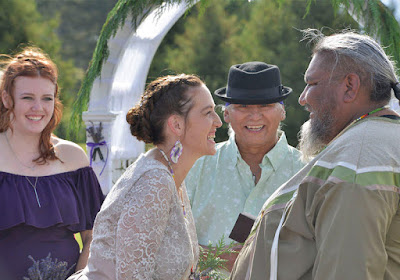 This is the story of Nanci and Thaddeus who are traveling to the Lakota Reservation in order to be married. As the pair prepares for their big day they wrestle with what form this interracial and inter-cultural marriage since Thaddeus would like Nanci to bend to take on the beliefs of his nation. However Nanci has worked too hard to get where she is and isn’t so willing to just be a wife and mother. And lest you think that this is a simple story Thaddeus is a member of the Cheyenne nation who was raised by white Christian parents while Nanci is white woman who had been raised by Lakota parents. The world is not a simple place.

A excellent documentary inhabited by two great people, NON WESTERN is a film you ae going to fall in love with. While the film is a heady meditation on our roles in society, family and and ourselves, that is all secondary to the fact that tis is a tale of two people who we truly like and want to see work it out. These are sweet people, clearly very much in love. They are the sort of people we would want to hang out with, not because they are are super cool, but because they are just really good people. You want this to go their way.

Yes, the themes running through the film touched me intellectually, but the human story at the film's center moved me deeply on a human and emotional level. It is the emotional level that had me getting misty at the final shot, and it is on that level that I am going to revisit the film many more times down the road.