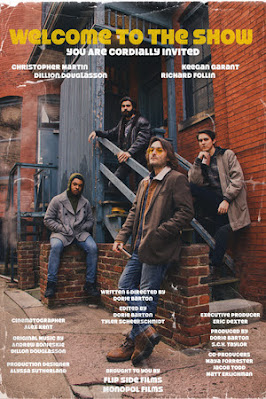 On the eve of Thanksgiving four friends, out drinking and getting stoned, find they are invited to The Show an interactive theatrical experience to be held the next day. Foregoing the holiday, and breaking up with a girlfriend in the process, the four friends go off on their adventure....

What happens once they show up at the theater is the film and in fairness I can't really tell you any more since that will clue you into where this goes. Basically what ends up happening is that friends end up discussing what is real, what is the game and pondering life as they try to work out how to get to the next thing. If you want a lot of heady and loopy discussions where you have to find your own answers this film is for you.

My reaction to the film is mixed. I honestly really liked the film and its discussions. I liked how it was a big old mystery for us as well as the characters on screen. I was with the guys all the way or rather until a certain point near the end when I completely disconnected. There was a point near the end when I realized this film wasn't going to end satisfactorily.  Frankly while I know what writer director Dorie Barton was getting at, thanks to reading the promotional material, I don't think it's up on the screen. I don't think she gets her point across, with the result the ending left me wondering why I spent 90 plus minutes watching this. To be fair I don't know what would have worked for me,  but I know this ending isn't it.

Is WELCOME TO THE SHOW worth seeing? Yes. There is enough loopiness and interesting discussions to make it worth trying. While the ending didn't work for me, it may for you.