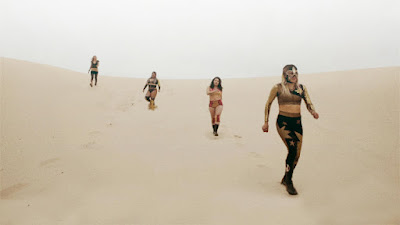 LUCHADORAS is a portrait of three female wrestlers living in and around Ciudad Juárez Mexico. The town is notorious for the much too large number of women who are kidnapped and/or killed each year. We follow the women as they go through their days, wrestle, and try to make it safer for the women in the area.

This is a good but slightly uneven film that is often an intriguing portrait of a way of life alien to most people.  It is not a wrestling doc, but a film about women in a specific place and their lives. Wrestling is merely the means by which the women connect to each other and find empowerment  where they can help make things better for the other women.

The unevenness that I mentioned is from the fact that while the everyday life part and the wrestling part are absolutely part of the same story there is a sense at times that this could almost be two films. The story of the lady wrestlers is a subject ripe for expansion while the story of the town where so many women are being murdered is perfect for another.  Truth be told I would love to see a film just on the missing and murdered women since there's clearly something wrong there and it should be highlighted so that the authorities are forced to act.

Quibble aside this is a very good little film. It is a wonderful portrait of three great women and the people in their lives