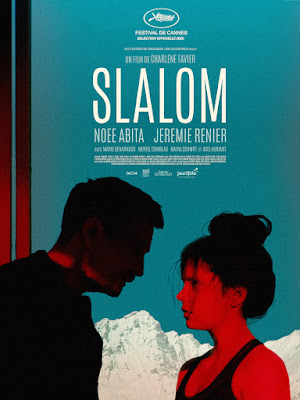 Lyz, a 15 year old young woman who shows great promise in pulled in several different directions by life and her coach who grows unnaturally close to her.
Slalom is the event in the film but it is also the way that Lyz, our heroine, gets through life. She swerves left and right depending on what is being thrown at her. Noee Abita is excellent at the young woman trying to make her way through life as all sorts of demands are being made upon her. It is a tale told in gorgeous widescreen images that will make you wish that you could see this on a big screen.
As much as I would love not to say that the film and it's thread of the coach taking advantage of Lyz is not a reflection of the way that some coaches treat their charges, the fact that there are constant waves of news stories breaking, makes it clear that the films depiction of a coach abusing and taking advantage of young woman seems to be on target. Its a sad indictment of the way some athletes are trained. I have to give writer-director Charlène Favier credit for not shying away in depicting what can happen.
As important as the film is in reflecting the seeming state of some sectors of sports, the film over all is not quite as compelling as it could be. Part of the problem is that some of the less meaty parts of the film seem to be by the numbers or to have been filmed with a certain amount of disinterest. Some the training sequences felt as if they were there as an after thought. Additionally the skiing sequences have to be among the least exciting  I've ever seen on screen, with Lyz seeming the slowest champion skier I have ever seen on screen.
While I like SLALOM, I'm not in love with it. Your mileage may vary.
Posted by Steve Kopian at March 08, 2021