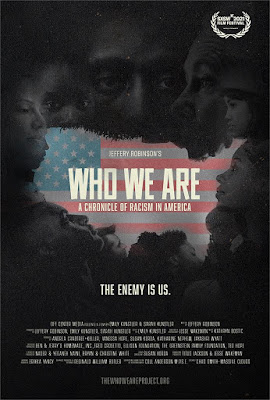 WHO WE ARE is must see film. Normally that is said it’s hyperbole, but this time it’s honestly and truly meant- as a living breathing human being you owe it to yourself and humanity to see this film.

An examination of the history of racism in America it is largely made up of a lecture that Jeffrey Robinson gives at New York City’s Town Hall that is mixed with footage of Robinson speaking about his life as well as his visits to various places important to the story he is telling (for example the film begins at the Lorraine Motel where Martin Luther King was shot). It is a film that puts the last 500 years of American  history into perspective.

Actually what the film does is explain what we think and why we think it. The film beautifully lays out the changing way that race and slavery was viewed over time. By showing us what people were thinking, really thinking, at certain points in history  Robinson grounds our thinking. We get a better idea of why we think and feel as we do. More important by ordering the history of  hatred he explains why racists and bigots feel as they do.  I would like to hope that any racists  or bigots who see the film will change their minds, however as Robinson explains early in the film some people who know that the facts don’t support their prejudices are too entrenched to change their minds.

I was rocked by the film.  I think I was rocked more by the film than if I would have been if I had just seen the lecture at Town Hall. I say this because the film opens things up. I mean that not just because of the locations but because we see Robinson engaging with all sorts of people which makes his words something more than things that are spoken to us as a lesson, but as something more real and concrete. He is showing us his ideas in action.

My words fail me.

Honestly all I have is “ holy shit” which I mean in  the best way possible.

WHO WE ARE kicked the legs out from under me. It kicked me in the chest and made me think and feel. While I knew a great deal of the history that was related, this was the first time that I saw it all threaded together in such away as have a true emotional and intellectual response. I say that as a person who was trained as a historian. I viewed events coldly and cleanly as a series of events- but WHO WE ARE brings it all to life.  Watching the film you can’t hold the facts and figures at arm’s length, rather they come alive and bite you on the ass and force you to engage on the most basic human level.

While I may need to see the film a couple more times to get all my words together, I can easily call it  one of the very best films of 2021 and possibly its most important as well.

The film just premiered  at SXSW and is a must see