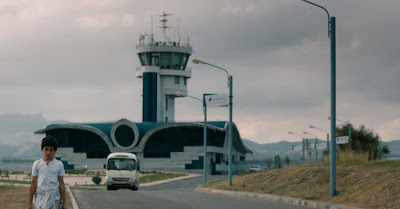 SHOULD THE WIND DROP is set in Nagorno Karabakh a tiny land locked country in Central Asia. Its over seen by Armenia but Azerbaijan is not happy about its existence and one report I read said it is actively trying to stop  this film from being released because it will let people know they country exists. The area has been scarred by war, occupation and genocide for the better par for the last century, and it’s only been within the last few decades that the country could has something like a peaceful existence.

The film is set in the country’s international airport, which has never been used because the placement of it makes the in coming flights a potential target by some other country’s military. As the film opens Alain, a French engineer arrives in order to see if the airport can actually open. Along the way he falls in with the people who work at the airport and live in the area around it, including a young boy who gets clean water from the taps at the airport which he then sells.

How you react to the film is going to depend on how you react to the glacial pacing. I completely understand that director Nora Martirosyan wants to put us on Nagorno Karabakh time but at the same time the film is very close to being inert. The film opens with an almost ten minute sequence as Alain rides in a cab to the airport. While I understand that it lets you know that the airport is in the middle of nowhere I’m not sure we need a sequence as long as that to set things up.  The rest of the film is part slice of life, part :can the airport open?" drama. While the stories are intriguing unfortunately the pacing keeps them from being fully compelling.

What bothers me is that at the heart of the film is an interesting story here. The film is very close to being a documentary about the airport and the troubled land it sits in. Its a great story that I would love to see told in a straight forward manner. While the film deals with the history and conflicts, it was a location of the Armenian genocide,  and it was ripped apart when the Soviet Union imploded, the film doesn't seem to keep it as front and center as it probably should. While the history shapes what is happening the film is lax in making sure that we are always feeling the weight of the past. Perhaps if there were more mentions of the past this might have felt more meaty and meaningful than the slow moving tale of people in the landscape.