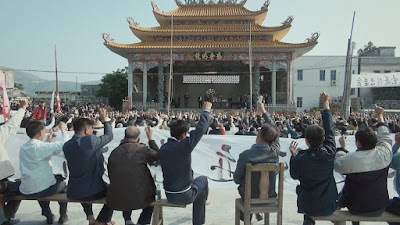 Jill Li's epic, and I mean that in every sense of the word, look at what followed the uprising in Wukan located in Southern China. The small farming village gained international attention when the farmers fund out that the local officials had begun selling off their farm land and pocketing the money. As anger grew protests happened and soon authorities were clashing with the farmers as the world watched.

Covering roughly seven years time and running a speedy three hours LOST COURSE is a true to life epic. There are dozens of characters and constant motion as Jill Li drops us into the middle of things and drags us along with events. That may sound like a lot to deal with, and on some level it is but at the same time Li keeps us constantly informed as to what we are seeing as well as what she is leaving out. There is never a point where we feel like we weren't told something. If we feel like we missed something it is purely we missed reading something in the on screen text or subtitles.

I was enraptured for the whole running time. I just sat and watched the screen and let things wash over me, too engrossed to really take notes.

A bittersweet film, things do not go wholly as planned making the title very apropos. The old corruption appears to be replaced with new and the government ultimately isn't a fan since as the film makes clear a good number of the people we see ended up in prison for organizing the protests. We are left feeling sad and kind of broken since things are not "all right" at the end but a different sort of broken or at best okay (maybe).

Ultimately LOST COURSE is required viewing. Not just because it tells a hell of a good tale but it also gives us a less than varnished look into what it is really like in China, a country so much in the news now thanks to Covid, the GOP attempts to blame them for "problems" with the recent US election as well as the ugliness in Hong Kong.