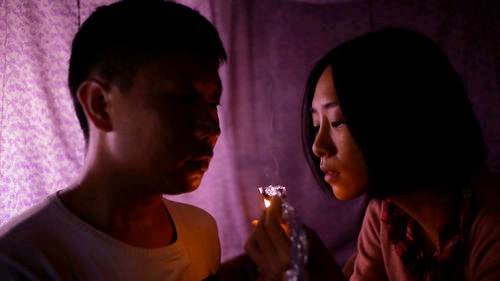 You can't work in a jade mine, they all use drugs. If you start using drugs what will become of us? - Father to his son.

Slice of life film follows poor father and son farmers struggling to make ends meet. Because the harvest was bad and the prices remain low they have made no money. They ask their neighbors to loans but no one has any money. With no where to turn the pair gets drawn into the crystal meth trade in the city.

How you react to the film will depend on how you react to the long takes and documentary style. The camera's movements are limited. Conversations play out in real time. At times action is limited to people sitting and talking. There is also a great deal of talk about trying to get money so as to get out of trouble. If only we could get money and buy a scooter, if only...

My reaction to the film was to kind of drift off. The repetitive nature of much of the film, actually the first half hour wore me down. Yes I know things are bad. Yes I understand everyone is struggling and there is no money to be had, but I didn't need to see the same conversation over and over again. Its not bad  but I tired of it quickly.

While not my cup of tea, it maybe yours. Recommended for those who want deliberately paced thoughtful films.
Posted by Steve Kopian at March 25, 2021