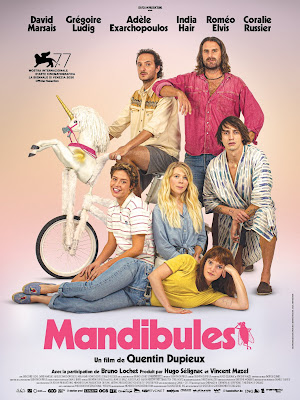 Two brain dead buddies are sent on a mission to deliver a suitcase for a friend they find their car vandalized so they steal a new one. Along the way they open the trunk and find a giant fly inside. Deciding not to deliver the suitcase they instead decide to train the fly...but things happen.

Quentin Dupieux's latest film MANDIBLES is almost a normal film. Almost entirely free of surreal touches, the film actually runs closer to a Farrelly Brothers film than his typical insanity such as a sentient tire out to kill people. Admittedly the film is centered around a giant fly found in the trunk of a car, but at the same time the fly falls away from things for long sections of the film and you'll almost forget about it.

I'm not certain what I think of MANDIBLES. In some ways this film is tighter than some of Dupieux's other films but at the same time without the madness of the out there situations he creates the film kind of falls flat. I think the problem for me is that without a loopy though line, even something as simple as gaslighting cops  in KEEP AN EYE OUT,  Dupieux's humor is unremarkable. To be certain I don't like all of his films but I will always try them because he is at least reaching for something. Here is a been there and done that lowbrow comedy that we've kind of seen before. Its not that Dupieux is repeating himself, he is repeating other people which is something he has never done before.

To be fair MANDIBLES is funny. It has laughs, many in very poor taste, and if that's all you want that's great but if you are a fan of Dupieux's madness you might find yourself slightly disappointed