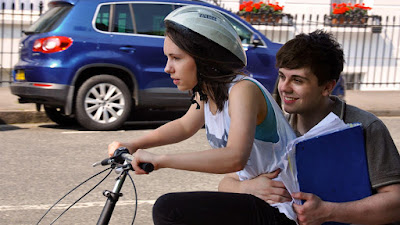 Anna-Elizabeth & Hillary Shakespeare's SOUNDTRACK TO SIXTEEN is a charmer.  A small gem of a film it is a film that is as awkward and winning as its two protagonists. It is so wonderfully likable that you won't mind the bumps along the way.
The film has 16 year old Maisy obsessing about never being kissed. An awkward, much too brainy young girl she is desperately trying to sort out where she belongs since the world is telling her she should be somewhere different. Into her life comes Ben, a super brain nerd who doesn't seem to mind the ribbing he takes because he is so smart it all comes easy to him. As they try to navigate a friendship, or is it a romance?, they end up uncertain of what life is throwing at them.
Despite being decades older than the two leads I found myself screaming at the screen "YES!!! YES!!! EXACTLY!!!!" as I was suddenly 16 again and pining for someone to love. Specifically unsure of how to deal with the Michelle, daughter of one of the teachers and who liked me to the point that she would flip her clog and clock me in the head when I pissed her off. But I digress.... or not because SOUNDTRACK made me feel like I was back in North Shore trying to figure out how romance worked and what in the hell girls were.
Say what you want, the Shakespeare sisters have done what few films I have ever seen and that is make a film that honestly and truly puts what it is like to be an awkward teen on screen. And when I say this I mean not in a Hollywood PRETTY IN PINK sort of  way, but in a way that dredges up that part of you that you were hoping never to have to revisit again because you are not a teenager any more. Sure the details of  being a teen have changed but the emotion and the thought process hasn't and this film reminds you of that fact.
Forgive the run on sentences but SOUNDTRACK TO SIXTEEN has broken me open and my younger self has come out and is writing this piece, because let's face it the film touched that part of me and brought it to life.
And while I could quibble about some uneven performances and a couple of awkwardly staged moments, there really is no point since the Shakespeare's have made a film that has transcended its bumps to be a living breathing representation of what it is really like to be young and looking for something greater than ourselves.
What an absolute joy.
This film is so highly recommended that even before it was over I stopped the film in order to tell my fiends they had to see it.
Posted by Steve Kopian at March 20, 2021