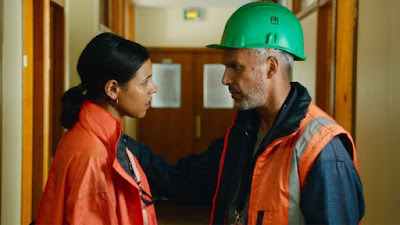 A young man leaves her job as an ER nurse to go and work for the mining company her father works for. The company has an excellent record for safety and waste removal but it soon becomes apparent that what is being portrayed to the public but is a front put up by the company, the politicians and the union since the waste is polluting the dumping sites and making the workers sick.

One of the very best films at this year's Rendez-Vous With French Cinema RED SOIL is a  beautifully done mix of social commentary and thriller. Not only are we on the edge of our seats about what our heroine will do, but we are also made aware of how big business, governments and other interested parties will do the wrong thing if it means they will get a couple of extra bucks.

The cast sells this tale beautifully. Normally you in films like this you don't get a sense of the characters outside of the moments on the screen  but director --- and writer doesn't do that. They give everyone small moments or odd lines that give us a sense of life off the screen. I love how  --- is  introduced by rushing a sic patient to the ER. It seems like a throw away to set things in motion, but the reality it also sets up her sense of right and wrong. She wants to keep people alive and do the right thing .

RED SOIL  moves us even as it forces us to think.