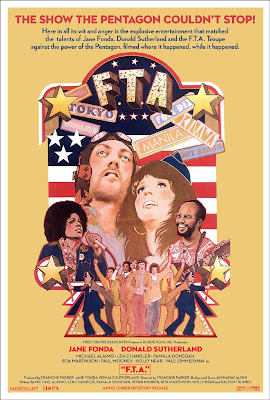 With FTA finally hitting virtual cinemas today, here is a repost of a piece I posted to IMDB in 2005

FTA is a time capsule that should only be opened by those who lived through it, and even then, maybe not...

This is the story of a group of actors and actresses who toured around the world playing near US military bases with a show called FTA for "Free" The Army. The acting troop is lead by Jane Fonda and Donald Sutherland. The film is a combination of performances and interviews with the GI's from the bases. Its nothing you probably haven't seen before in other ways, heart felt songs about how we love the soldiers but hate the war, general protest songs, skits about how absurd the war is and general silliness. Very little of it actually holds up as funny or touching, although some of the ideas work in structure if not execution, Donald Sutherland doing a play by play of a battle as a football game is very clever, but not very funny.

I completely understand why this film hasn't been seen in 30 years, it simply is not very good. I doubt highly that this film would have ever played well to any group other than those near the army bases at the time. Its a starry eyed version of a college frolic.

The naiveté of many of the actors is very hard to take. The "war is bad" attitude they have is nice and simple, but when mixed with the uncertainty expressed by the soldiers who are actually in harms way, the show comes off too sweet. The film shows clearly why Jane Fonda is hated by many people and still called "Hanoi Jane", since she comes off as a spoiled rich girl who doesn't really have a clue as to what is going on in reality. Donald Sutherland, for what ever reason, seems to carry a weight and understanding most of his fellow performers don't, and I felt he had a better grasp of what was going on.

I wanted to like this film, especially owing to some of the parallels with the present war in Iraq. I was hoping to find some kernel of truth to take away, some insight into a country at war with another country and itself, and instead I found just a quaint period piece that was never in touch with anytime, even its own.

I can't recommend anyone see this, unless you are a Fonda or Sutherland completest or if you are a student of the Viet Nam war and its effects on the home front.