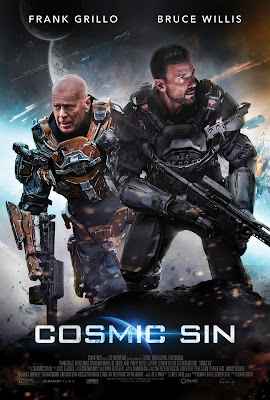 Five hundred years into the future  a distant mining camp makes first contact with an alien race. It doesn't go well. As the government tries to sort out what happened, the survivors are returned to earth for debriefing, but the aliens  have tagged along....

If you can forget that  a lot of this doesn't make a lot of sense, this is a good little action film. What I mean by the film not making sense is that after 500 years people drive Ford trucks  and other modern vehicles and the set up of society seems to be an after thought. There are a bunch of things that will make you wonder if anyone thought it all through.

Thankfully the things that make you question the thinking of the plotting disappears once the shooting starts. As the bullets fly the film picks up and this action fan just went with it. The fights are well done and entertaining and honestly I had a blast watching them spin out.

To be honest there isn't much to say beyond that. This is an entertaining action film that doesn't want to reinvent the wheel. Its just a wonderful film to curl up with on a  rainy evening.