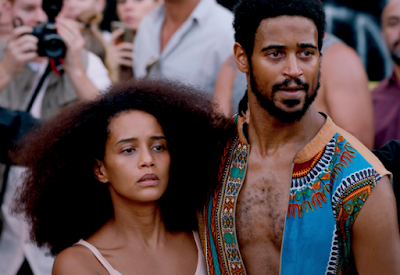 In a dystopian Brazil of the near future anyone with any sort of features which might have come from an African ancestor are to be rounded up and sent back to Africa.

This is an uneven polemic about race, specifically about Brazil but applicable in the United States and else where. This is a film that ponders what would happen if we tried to send everyone back "to where they came from. Part of the film is a discussion of race and part of the film is a thriller as the characters struggle to rebel against the governmental deportation

I had problems with the film early on. Part of the problem is the film either tries to explain too much or not enough. With the opening sequence of an old woman going to get money for reparation's had me feeling as though I was coming in from left field. This was followed by several sequences where there there are lng discussions about this dystopian world and how we got there. It was both too much and not enough. I found I kept wanting to stop the film and call the director and ask him why there was so much exposition. I'm not sure how much of this is "bad story telling" or simply not understanding Brazilian society and politics.

I lost interest early and while I hung in to the end I never felt connected.