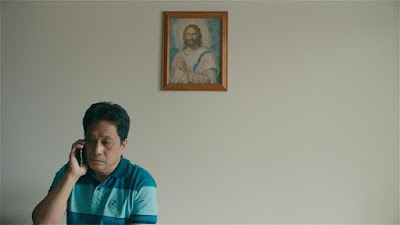 A Filipino man pushing 50 has never left home. He desperately wants to find someone because he doesn't want to be alone. When his mother dies, he has quit his job to become a full time caregiver  for his father. Help comes in the form of a cousin from the Philippines. Will she help him open up his world?

This is a good little gem of a film. Its a nicely acted film that feels real. Having experienced situations similar to what's in the film I can attest to the fact that the film gets a great deal right. There was a lot of things in this film I could relate to.

What I really like about ISLANDS is that it doesn't go for the sensational. For example it doesn't do anything crazy with the relationship between the cousins.  I also love that the film doesn't shy away from the difficulty of dealing with an ill parent. We see the toll it takes on everyone.

And while the film shows us the difficulties and awkwardness of it all, it also reveals the hope for ultimately this is not a film about a man caring for his parents but coming to or back to life. This is a film about a man finding away through some tough times in order to be happy.

While ISLANDS may not move the pillars of heaven but I was moved. I think you will be too.