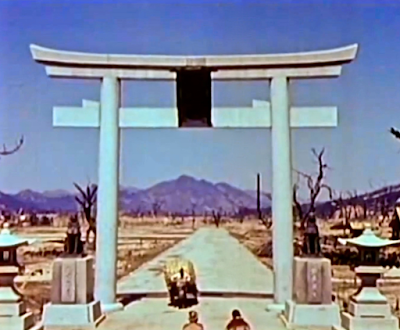 Nuclear war represents the end of everything – Hubert Sussman

ATOMIC COVER-UP is the story of the cameramen who recorded the destruction of Hiroshima and Nagasaki.  It is a story that begins the day  after the bombing when news reel cameraman Shigeru Miki passed through the city and realized that someone had to make a record of what happened.  Working through the weeks until the Americans arrived he and his colleagues were responsible for much of cinematic record of what happened. Eventually they were joined by Lt. Daniel A. McGoven who came to the cities with color film and started to record himself. Eventually the men met and along with others began making a full record of what happened. And while the army sought to shut it all down and destroy the footage, they didn't want people to know how terrible atomic weapns were, the need to record the medical effects allowed them to continue filming – despite the fact the US government would restrict access to the footage for decades.

Not to put too fine a point on it ATOMIC COVER-UP reduced me to tears several times. The film opens with an American officer describing walking through the ruins of a once great city with his cameraman and being confused by the sound of singing. Heading towards the sound he found the ruins of a church packed with parishioners all singing….and marriage of words and music reduced me a sobbing mess. I don't know why but the thought of people simply trying to carry on in the face of such utter destruction moved me.

Despite reading and seeing numerous films on the bombings this is the first time it all came together in a devastating gut punch. A good part of that is the result of seeing footage of Hiroshima shot by Miki literally days before it was wiped off the face of the earth contrasted with his footage of the rubble days later. It was the first time that the enormity of what was lost hit home.

While this is framed as the story of the camera men this is also the story of much more. This is the story of the survivors (some of who survived for decades), of the city (which was rebuilt) and most devastating the willingness of humans to try and forget or hide the terrible things they do. Thankfully there were good men who knew it all shouldn’t be lost and made sure that the films couldn’t and wouldn’t disappear (even to the point that they hid copies of the films)

This film will rock your world. It is a film of quiet and devastating power that will bend the knees of even those who think they know everything about the bombings. You will be moved. It is a film that makes clear why the military and the hawks of the world would like record of the bombings to go away and more importantly why we must never let this happen again. It also makes clear that the whole idea that there could be a post apocalyptic existence is a joke.

This film is a must see, not just because it is a good film but because as a member of humanity we must bear witness to to the pain and suffering that we and our forefathers have inflicted, and make sure it never happens again.

One of 2021's most important films and as such highly recommended