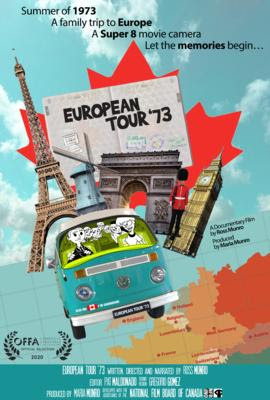 I don't know if I want this film to remain a short or if I want to see a feature expansion, possibly as a narrative instead of as a doc. Either way Ross Munro's EUROPEAN TOUR '73 is a blast.
The film is a mix of home movies, animation and remembrances of the trip his family took across Europe. Its a crazy tale that is deftly mixes nostalgia with humor to create a film that touches the head and the heart. Its a film that gets the right balance to make one of the last stops of the trip to Dachau be moving and make you wonder what his parents were thinking before hitting you with the somberness of it all.
I was moved and as I said at the top part of me  wants to see more of this trip.
EUROPEAN TOUR '73 is currently on the festival circuit and recommended.
Posted by Steve Kopian at March 22, 2021