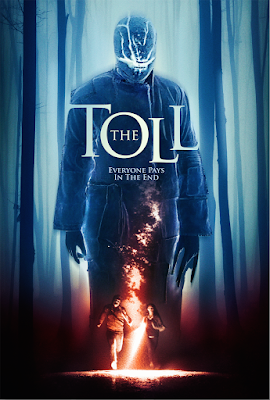 A woman and her driver end up stuck in the woods after a wrong turn puts them into the territory of the Tollman.

More slow building thriller than a jump scare machine, THE TOLL is the story of two people having to come to terms with their pasts. Its a well made and and well acted film that is entertaining  and suspenseful.

The real question here, and the one that s keeping me from writing more on the film is  how many similar films you've seen recently. I know that the fact that I've seen five or six similar films, both features and shorts in the last year where two people take a car into the woods and something happens. For better or worse this seems to be a new horror sub-genre that allows filmmakers to turn out a good film for a little bit of money. Some films are thrillers, some are supernatural tales some are other types of films. While  I liked the film, but the fact that it as a writer I've been seen a lot of films with a similar set up worked against me loving it.

My quibbles aside, if you want a good thriller on its own terms, give THE TOLL a try.