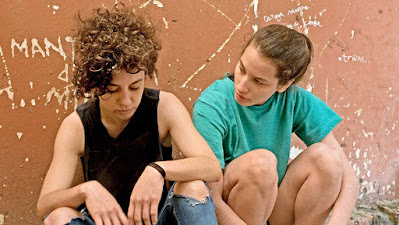 Iris is a young woman living in a housing project with friends in Argentina. She is attracted to and falls for Renata a young woman a few years older than herself.

A good if rambling slice of life, ONE IN THOUSAND shows puts us into a world where first love is not as easy as some might imagine. It is a nice look at a bunch of LGBT friends wo are looking to just get by, while Iris is simply trying to navigate love and what it will mean to her world since she will truly be out.

A beautifully made film with a cast of non professionals there is much to like thanks to the open and inviting performances of the cast. They make this a film that we want to engage with even if at times the view of the world the film presents is a little too perfect.

Quibbles of the plotting aside my only real problem with the film is the pacing. Running just under two hours the film at times seems a bit unfocused as it lets events play out much too leisurely In all honesty if the film was trimmed it would be a film I loved instead of just liked