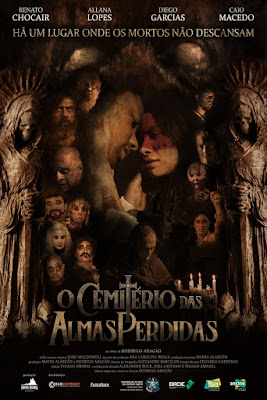 A blind monk is writing a book at the request of Satan. The Inquisition takes the book and tortures the monk to death for good measure. A Jesuit priest kills the inquisitor and steals the book high tailing it to the new world. When the ship is caught in a bad storm the Jesuit uses the power of the book to save himself and the sailors everyone on the boat. However it is a bargain made in hell and they need blood every full moon. From there the Jesuit and the sailors come into conflict with the locals and a traveling band of performers.

Violence happens, blood flows, monsters walk the earth and all is right with the world.

An insane and often balls to the wall horror film this is a ride that manages to delight for most of it’s running time. This film is largely a grand trip into the supernatural monster territory, sure the film can wander about a bit but when the film is firing on all cylinders its a blast.

What I love about this film is that it is clear that the filmmakers are clearly having a good time. They are telling a wild and crazy horror comic book story and enjoying the hell out of it. Normally the flashy “look at me” style of filmmaking gets in the way of my enjoying a film, but here the style marries perfectly with everything else and I just went along with the ride. It reminds me of some the great Spanish Horror films of the 70’s and some of the Joe Coffin films but with it’s own spin.

As I said above the film isn’t perfect but the films joys far and away out weigh the problems.

Recommended, especially for anyone who love supernatural horror.