Dope is Death (2020) hits theaters, both real and virtual on Friday 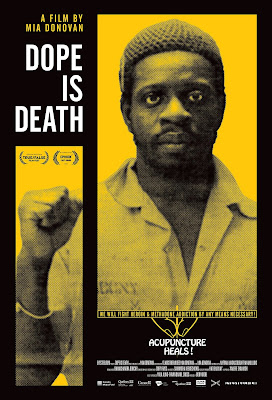 A look at how the influx of heroin into the ethnic centers of America  lead to groups like the Black Panthers and the Young Lords  to fight back at what they perceived as the system trying to stop their growing political power. The need to help the community lead to them taking over Lincoln Hospital in the Bronx and setting up alternative methods of drug treatment which wanted to use methadone as means of controlling the masses. Success was relatively short lived and the treatment program was shut down and a version moved to Harlem... then things went weird.

A trip back in time to the bad old days of the late 60's and early 70's when crime was on the rise and the political activism of the minorities rankled the white power structure. They knew what was best for everyone and they were willing to use their power to make sure they remained in control. Full of old photos,video and film this is a film that will put you into a articular place and time thanks to an endless stream of talking heads who put it all into context.

What intrigued me about the film was the third act twist where just as you think everything is winding down you suddenly have an armored car robbery that makes you sit up and take notice. Reality really is stranger than fiction.

This is an important film.  If you want to understand where we are today in regard to power and the political struggles of minorities in America then you have to see this film since it gives you the ground work of understanding  why things are so messed up.