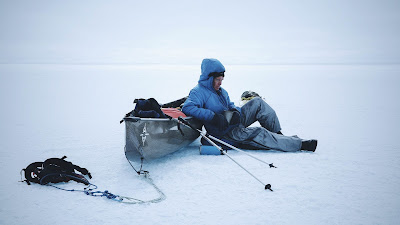 This is a portrait of Will Steger who in 1989 lead an expedition across Antarctica on foot. The mission was done in order to begin to take readings of the changing climate as well as to halt calls to exploit the continent. The past is contrasted with the present as we watch Steger as he crosses the arctic solo and charts the disappearing ice.
As a stay at home streaming film AFTER ANTARTICA is a good film. A portrait of a man who explored the world this is a film that is going to make many people want to get up and go themselves (though not into the wilds at the bottom of the world). This is a really nice look at a man who helped open the eyes  of many people about the deteriorating state of the world.
I am annoyed that the covid situation prevented me from seeing this on a big screen. The thought of seeing the images of the ice on a HUGE screen boggles the mind. I mean the sections of the fil where Steger and his team are trapped by the weather at the South Pole are chilling now, I can only image that they would be terrifying in a theater with truly big sound. This is a film that needs to be seen big and loud.
Premiering today at the SFFilm Festival After Antarctica is recommended
Posted by Steve Kopian at April 09, 2021