Eden on Sisters With Transistors (2021) 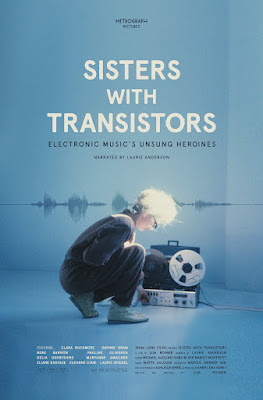 Women have been a part of electronic music from its very beginning. While those in the know are well aware of this, they’re still all too-often overlooked as pioneers. Lisa Rovner’s new documentary, Sisters with Transistors, changes that.

The documentary uses all archival footage and interviews as it profiles several women from electronic music’s history. There are names you know (or at least ones you should!) -- Delia Derbyshire, Daphne Oram, Suzanne Ciani -- to some you may not -- Eliane Radigue, Maryanne Amacher.

Tied together with smart narration from Laurie Anderson, the segments serve not only as small musical biographies of each of these women but form a larger picture of the history of electronic music. The documentary is more or less in chronological order, starting with theremin player Clara Rockmore and moving forward. It’s hypnotically structured, moving from one musician to the next through time and sometimes circling back to them as they move ahead in their careers. The segments are distinct but they all feel cohesive. I adore how much Rovner lets these women speak about their own work and music rather than bringing in a bunch of others to talk about them. I also love how much we get to hear of the music these musicians made.

Of course since more footage of later electronic musicians exist, the more focus the documentary gives to them. Some of these, such as the segment about Pauline Oliveros, feel like mini-documentaries on their own. Still, that doesn’t always work -- the extended sequences with Ciani feel slightly unnecessary -- not because she doesn’t deserve it, but because there’s already an excellent documentary about Ciani, A Life in Waves (2017). Other artists, like Wendy Carlos, don’t seem to get enough attention, but I imagine that’s only because of the lack of footage and interviews.

Rovner also only sticks to the pioneers and doesn’t bring in any of the younger women making electronic music. That’s fair -- that’s not necessarily what this documentary is meant to be about -- but I would’ve liked a bit more of looking forward rather than only looking back.

Is this comprehensive? It’s impossible for one documentary to be so, but it’s a well-deserved celebration of a group of women who deserve to be celebrated. I felt like I already knew a lot about these women and the history of electronic music, but I came away having learned a lot and being absolutely enchanted by the experience I had watching this documentary. Even if it’s not a subject you think you’re interested in, this documentary will leave you realizing how much you’ve been missing.

Eden currently has a project called In the Loop, focusing on time loop movies. New posts appear weekly on Tuesdays.
Posted by Steve Kopian at April 27, 2021