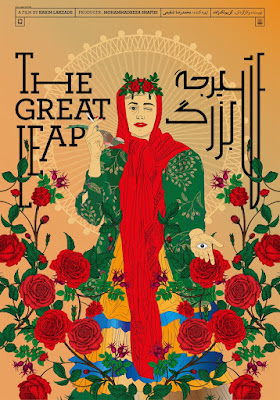 THE GREAT LEAP haunts me. It is the first film in a very long time that when it ended had me staring at the screen wondering what the hell I had just seen and itching to see it again. It is a film that I didn’t have any sort of an opinion of, however I was absolutely delighted that the film that I had encountered a film that challenged me and forced me to not only work with it but also to consider what it was trying to tell me. I adored that here was a film that was the best of all possible films, one that plays by its own rules and shakes up what I think of as cinema.

The plot of the film has a woman contacted by the brother of her ex-husband. It seems that ten years earlier she had given birth to a deformed child with a big head. Everyone thought there was something wrong but the hospital wouldn’t kill the sickly infant. The father and his brother then took the baby into the desert with the intention of burying it alive. However they couldn’t find it in themselves to do so and gave the child to an old woman, sending her money for his care. Now the woman has died and no one wants to care for the child. Heading off with her ex-brother in law the woman goes to find the child she thought was dead.

What follows is a mystical journey that is largely unlike anything you’ve seen before. Sure there are echoes of other road films and quest films but filmmaker Karim Lakzadeh bends things for his own purposes. The result is a film that feels one of a kind. In trying to describe the film I keep wanting to say that “it is kind of like X, but not really”. What ever X I come up with is only a poor approximation of the way things really are.

The bitch about THE GREAT LEAP is I am still processing it but I need to get a review up because the film is playing right now at the Fantaspoa Film Festival. I am torn between being able to write the film up and do it justice but at the same time waiting until I have the correct words might prevent you from seeing the film before the festival ends. If you love off the beaten path films you NEED to see this film.

Right now I know  I definitely like the film, hell I watched it twice in twelve hours, however I am still unpacking it. I’m desperately trying to get distance from it but I can’t seem to do that. The final sequence is playing over and over in my brain. I don’t know why.  At a time when so many films are things that I watch, then write up before completely forgetting, THE GREAT LEAP is a film I can’t shake- hell I’ve watched it twice more or less in a row. I rarely do that.

Ultimately I highly recommend THE GREAT LEAP to anyone who wants a film that is unlike any other, which is most of the regular readers of Unseen Films. I also recommend it to adventurous film goers and anyone who doesn’t want all the answers or a Hollywood style film.