April Ghouls at the Riverside Drive in 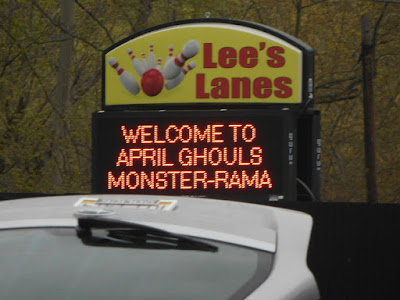 After having a blast at last September's Super Monster-rama at the Riverside Drive-in in Vandergrift Pennsylvania my brother and I went back for this spring's April Ghouls. We were hoping to watch a as many of the eight films as we could. We were also planning on visiting several movie locations along the way.

The distance to the drive-in from where I live is about seven hours by car. We have to leave the confines of Long Island and schlep across New Jersey and most of Pennsylvania (it's about 40 minutes from Pittsburgh). Last time we did the drive on the first day of the fest and it resulted in my brother effectively sleeping through the films. This time we planned in travel days. 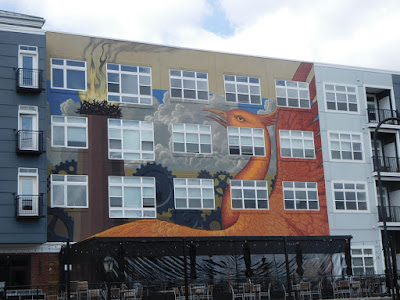 On the way to the fest we made a stop in Phoenixville. It's a beautiful little town that is working to make itself into a a hub for the surrounding area. There are stunning murals on the walls of several buildings and a great artists vibe. 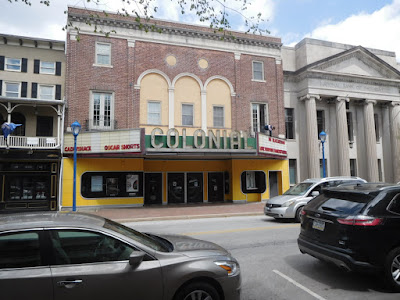 We stopped by to see the Colonial Theater which is best known as the location where te the Blob ate the projectionist before spilling out into the audience thus creating a legendary image of everyone fleeing into the street- which is recreated every year at Blobfest (which is this July 9 to 11). 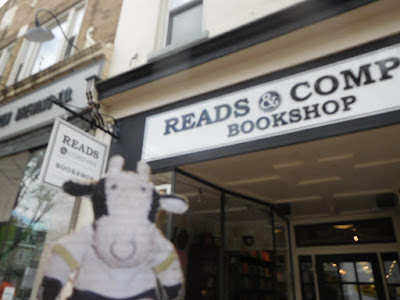 Across the street from the theater is the Reads and Company Bookshop which is awesome. And while we were in town we went to Uncle B's BBQ and pigged out. Trust me, the food is awesome. 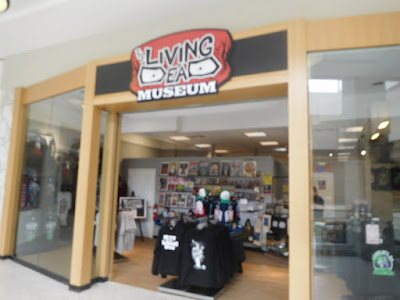 As we did last year we stayed in Monroeville at the Double Tree at the Mall. And you all know the mall, that's where DAWN OF THE DEAD was filmed. It's soon to be the new home of the Living Dead Museum,. It was previously at Evans City-near the cemetery where NIGHT OF THE LIVING DEAD was filmed. However covid has forced it to move. While the giftshop is open the full museum opens in July. 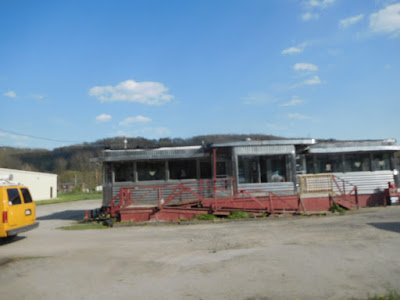 On Friday before the movies we went to the Yak Diner (once the Yakity Yak per pictures inside). It looks like it's really run down, and it is, but the food was excellent and the service wonderful. As my brother Joe said he wishes he had won the lottery just so we cold pay to renovate the place. 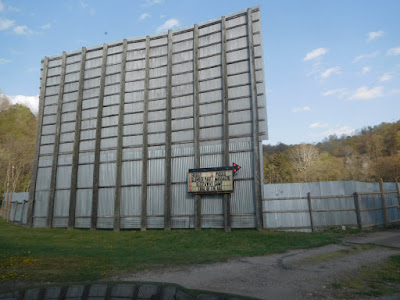 Friday night at the drive in was okay. While Joe and I got to talk to several people including Mike and Jake and we enjoyed the vibe we were not so thrilled with the long delay to start things.  The theater had brought in two stars of SLEEPAWAY CAMP to sign and meet and greet. While I have no problem with that they pushed the start time of everything to after 9 because the signings were still going. 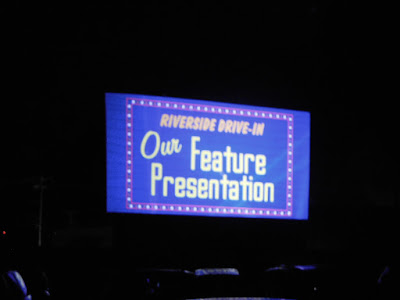 Right before it all started there was announcement that the pre-film trailers would start "in a little while" which was followed by quick change of mind that had them starting immediately.  Neither Joe nor I was happy when they shuffled the order and played the gawd awful SLEEPAWAY CAMP first. (We we wanted SLUMER PARTY MASSACRE)

While SLEEPAWAY CAMP is partly tongue in cheek, it is top to bottom awful. The story of a series of murders at a summer camp it is nothing special though it's clear it was filmed in New Yawk as can be told by the accents. Its not scary or funny and is largely labored. It also could be considered offensive by todays standards thanks to the female killer being revealed to actually being a boy forced to be a girl by her mother.

After the film Joe and I left. Our patience was shot. They were running late and after a 10 minute countdown clock, trailers and such they were going to do a Three Stooges  short.  Which meant the second film was going to start around midnight.  We headed back to the mall. 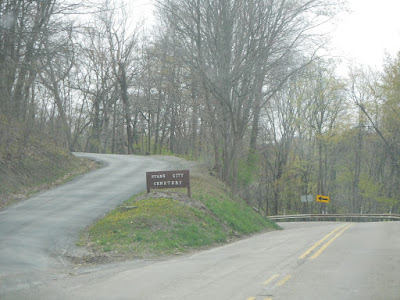 On Saturday we had a change in plans and so we headed out past Pittsburgh to see where they came to get Barbara in NIGHT OF THE LIVING DEAD. The Cemetery  is in Evans City and was worth the trip. Once we were there we stumbled around until some other people attending April Ghouls pointed out that everything was filmed with in a couple dozen feet of the chapel at the entrance 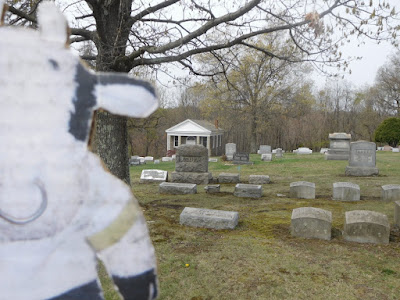 Afterward we went back to the Monroeville Mall and walked around. We stopped at Valhalla Indoor Axe Throwing and spent an hour throwing axes. Brendan who worked there was a blast. He was funny and patient and he got Joe to the pint where he could have an axe stick in the target. Me on the other hand was hopeless and only managed it 3 times in an hour. 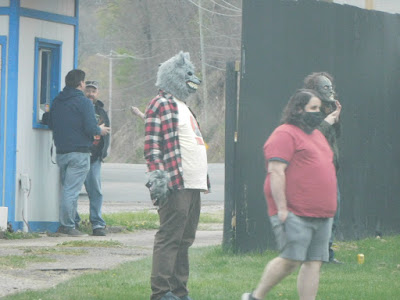 Saturday's movies were choice. It was to be a quadruple feature of AMERICAN WEREWOLF, THE HOWLING, HALLOWEEN 3 and MASOLEUM. We were hoping to make three of the four. We made the first two  before the rain caused us to leave. The problem with the rain is that without a drizzlegaurd for the windshield or a willingness to sit in a tent, you have to keep running the wipers. Additionally we didn't want to push our luck driving home tired and in the rain on unfamiliar roads. 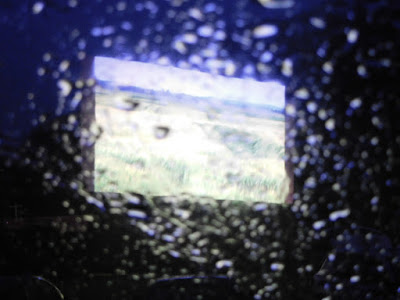 Seeing AMERICAN WEREWOLF for the first time in a long time I was struck by how there are huge plot problems regarding time. I never realized the short time frame of it all (which makes the romance WTF). I also could really see that  things were cut at some point because there is real sense f things not said and characters barely developed. I also realized that while John Landis hits the right notes most of the time, his desire to do things like the car crash sequence, kills the mood. Honestly the big crash at the end kills the emotion of the finale.

Joe Dante's THE HOWLING is a better film. A rethink of the werewolf legends that sends up self-help and TV journalism it is a much better constructed film. There are real laughs and more importantly real chills. Dante never forgets this is a horror film and gives us scary moments. To be certain some bits don't work, the wolf sex scene is embarrassing, but mostly this is a great film

When the film ended we headed back to our hotel.

Ultimately, rain and late start aside, Joe and I had a blast. Hell it ended with an epic ping pong game with my cousins on Sunday. Assuming the movies and our schedules allow it we will be back in September.