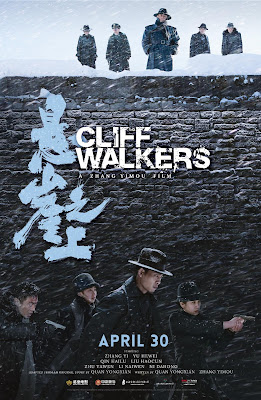 Zhang Yimou wades into the espionage genre with a good, if narratively messy, World War 2 spy thriller.
The film has  four communist agents parachuting into a Japanese controlled puppet state. Their mission goes sideways from the start as they are set upon by other spies looking to stop them.
I'm not going to lie, I really don't know what they really were supposed to be doing beyond fight the Japanese. I don't think neither Zhang Yimou nor his co-writer Yongxian Quan really know what the mission is either. I don't think they care. On some level I didn't care because I was half way into the film before I realized I had no clue what the mission really was. While that lessened my enjoyment to some degree, in he end I didn't care.
The reason I didn't care is  that the film pretty much never stops moving.  The film is basically a great series of set pieces. They bleed one into another, pausing only long enough to allow us to breath . I was just carried along in the best sort of  away. The sequences really are killer and I need to see the film again just to see how the pieces were put together.
If I have any real complaint is the films insistence on seemingly dressing everyone in a similar style. Initially everyone is in similar snow where. Later it becomes black trench coats and wide brimmed hats. There are times when everyone blends together. I didn't like it because pausing to consider who was who pulled me out of the film.
Quibbles aside, this is a great old school spy  film. Its exciting it never stops moving and thee are characters you  care about. What can I say I had a great time.
Recommended.
Posted by Steve Kopian at April 30, 2021