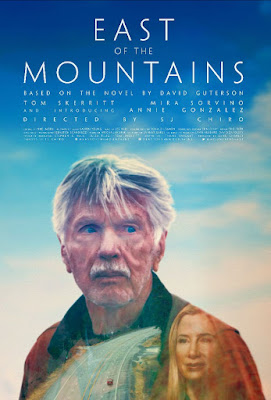 Tom Skerrit has one of his rare lead roles in East of the Mountains playing a retired doctor who, in the wake of the death of wife, packs up his dog and heads back toward his boyhood home, nominally to go hunting. Along the way he encounters some nice people and an old friend.

This is a good but not great film. Based on a book by David Guterson who wrote Snow Falling on Cedars, the film the film suffers from being a straight forward telling of the story. While there is nothing wrong with that that  the narrative is incredibly similar to about a dozen  similar films that come out every year. In changing forms from novel to film the language and interior monologues that made the book special end up largely missing. The details and shading of Guterson’s words is missing.  We see the events but with out the words we don’t really get a fuller sense of Skerrit’s character. This is especially true some of the flashbacks  which don’t quite have the weight that they should.

On the plus side the performances are first rate and they carry us along when the narrative isn’t doing anything special. Everyone manages to give us well rounded characters which make us not only like the film, but want to revisit it.

Of course the best reason to see the film is Tom Skerrit. After decades of playing supporting roles he steps into the spotlight and hits it out of the park. Playing an older man nearing the end and lost in his own life Skerrit hits every note perfectly. It’s a performance that is both emotional and physical, and considering that he is just short of being 90 in real ;ife, I’m kind of surprised that that the performance didn’t kill him. My question to Hollywood is why didn’t you give him more leads since he is clearly capable of crushing it.

Despite my gripes, I liked East of the Mountains. It’s a solid little film with a standout performance by an under appreciated actor.