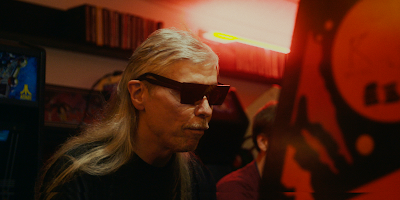 Portrait of legendary arcade gamer Kim Cannon Arm who wants to beat his own record by playing Gyruss for a record 100 hours straight.
Forget what you think this film is, this is something else. A wickedly entertaining look at Kim, his friends and the place they hang out, it is video game documentary that is much more than a video game doc.
The truth of the matter is this is a film that is all about a kind of culture that is largely all but gone now. While arcades and arcade games have been making a slow come back, the guys in this film kind of seem to be stuck in the 1980's. Kim's love of the games dates back  to when he was a teen in the 1970's and now decades later, despite having kids and grand kids, he is still doing the same things, playing the same games.
What isn't the same is the structure of the film. Focusing on more than just Kim, but is friends as well, the film is constantly spinning off in unexpected directions. We really get to know the guys and their lives and it makes it so much more interesting than if this was simply a film about a quest to play a game. This is ultimately a film about how some guys live their lives and find meaning.
I loved Kim and the rest of the guys.
CANON ARM AND THE ARCADE QUEST is a delight and recommended
Posted by Steve Kopian at April 29, 2021