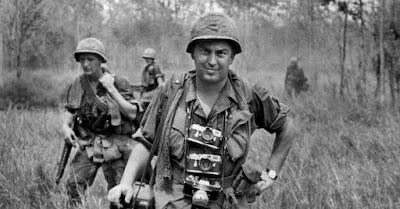 DATELINE – SAIGON is a great film.  The film is a look at the early days of American involvement in the Vietnam war from the stand point of several legendary reporters (David Halberstam, Neil Sheehan, Malcolm Browne, Peter Arnett, and photojournalist Horst Faas) who were there in the early days.

Told by the men themselves the film paints a portrait of war in a way that is atypical. Instead of being a grunts view of the war, it’s that of some gentleman on the outside. Yes they get involved (Arnett for example was in country for 15 years) but we see more than just the battle fields and military bases. There is a lot of footage and stories of things happening in the cities and villages away from the battles.

The film also paints an interesting portrait of what exactly was going on in the early days. The men are told not to report about the aircraft carrier that pulled into the harbor of Saigon. A trip into the bush to engage the VC turns up nothing and is seen by the reporters as being a sign that perhaps the troops don’t know what they are doing.

And speaking of not knowing what one is doing one of the great threads to the film is how we see what happened when you went on assignment in a war situation for the first time. We get to hear as the reporters learn what to do so they don’t get killed and so they don’t get sent home in shame.

I love this film a great deal. As a war child, I grew up watching the film unfold on the nightly news I have always been interested in the story that dominated most of my first decade of life. On some level I thought I had a handle on much of what happened, especially when my knowledge was supplemented by the various PBS series on the subject, however, as DATELINE  reveals there is always more to learn.

A must see when it plays on Ovid.tv