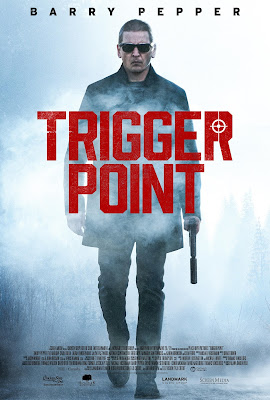 Barry Pepper plays a disgraced black operative. Years ago he and his team went around removing bad guys, then things went wrong and he disappeared. After a decade on of living a quiet life the old life comes calling and he has to help an old friend rescue his daughter. But things are not as they seem....

There are tons of low budget low key action films being cranked out every year. Some are good, some are bad. Most go in one eye and out the other. I like to cover them because they are usually mindless and distract me from the world. And then there are times like when films like TRIGGER POINT come along where I am so delighted with the film when it ends that I am screaming at the scream "DON'T STOP NOW!!!"

The truth is TRIGGER POINT is one of the best action thrillers I've seen in a long time. This is a small scale gem that is perfectly cast, wonderfully written and magnificently directed. It takes the small budget and modest budget and turns it to its advantage. This is a black op world where no ne wants to get noticed so everyone and everything is close to the vest. No one wants a big scene and it helps keep things tense since no ne wants the cps to come down on them. The script gives us a reason to go small and we believe it.

That the film works as well as it does  is because of the cast and characters. Barry Pepper is fantastic as Nicholas Brazzer. He is the right amount of world weary and bad ass. The rest of the cast shines too. I love the people in the town who are Pepper's friends-and as for the people in the shadow world they are a fine collection of characters. Who cares if they are a tad cliche at times, the actors like Colm Feore as Pepper's ex-boss give them enough ticks of their own that you really don't care.

I truly love this film and I've watched it a couple of times since I first saw it.