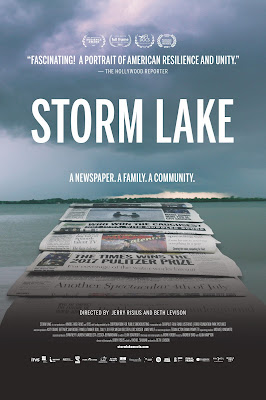 Portrait of the small town Iowan newspaper The Storm Lake Times, it's Pulitzer Prize winning editor Art Cullen and his family. Its a twice a week paper with 3000 readers and it is fighting to stay in print.

I almost missed this excellent film because I was too distracted by other things to take a look at the film. It wasn't until the film started to appear in festival line up after festival line up that I realized I had to jump in and take a look. I'm glad a I did because the film has a great deal to say about a great many subjects.

The nifty thing with this film is that the filmmakers lucked into a great deal of drama. First they caught the early days of the last Presidential election  and then they found themselves covering the the paper as it had to struggle through the covid crisis. As bad as some of the turns are it makes for even more compelling viewing.

I loved this film. In a year when I've seen probably too many documentaries I was delighted to discover this small little charmer that not only entertained me but forced me to consider everything I thought I knew about small tons and the news business.

Highly recommended where ever you see it.