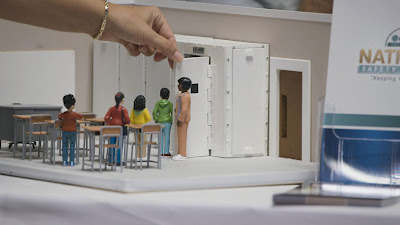 In these days before Halloween the real world horror film BULLETPROOF is a kick in the chest. Its a film that starts rocking your world and then pushes you to the ground.

Todd Chandler's film opens with an active shooter drill in a school. We watch as students and teachers react to a drill simulating an attack on the school and then moves out to to explore how we as a nation are handling the very real possibility that some nut will bring a gun to a school and begin shooting. What I found chilling was not so much that it happens any more, it happens enough I feel kind of dead to it, rather the horrifying part was the realization that there is no a who industry that feeds on the threat of violence. Think about it school shootings happen so often there are people making a living selling things to help you stop a shooter or help in the aftermath.

Basically this film is scary because we've reached the point where we pretty much know someone is going to go nuts and shoot up some kids every week or so. We have stopped being shocked and just accept that kids are going to die.

I have no words for the revelation.

I know many of you are going "no, duh" but at the same time you have to realize as intellectually obvious the fact is, the horror doesn't come until Chandler forces us to feel the horror. He makes us consider, really consider what it all means and we are rocked by it.

This is a must see. Even assuming you think you know what's going on intellectually, BULLETPROOF will make you feel it emotionally.

BULLETPROOF opens Friday in NYC (Metrograph), LA (Laemmle) and Chicago (Facets) among other cities. All playdates: http://grasshopperfilm.com/film/bulletproof/ It is also available to rent via Grasshopper Film's https://projectr.tv/ in the US and Canada. Todd Chandler will be doing in person Q&As at The Metrograph on 10/29 and 11/1 and will be joined by Kirsten Johnson on 11/1.
Posted by Steve Kopian at October 28, 2021