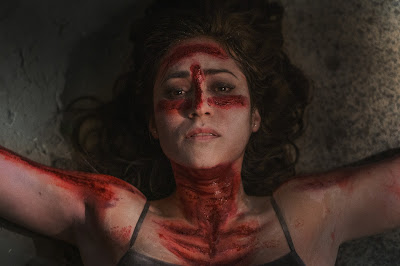 The Old Ways is a film I admire more than I like. The story of a woman from Veracruz in Mexico who long ago left and grew up in the US she returns as a reporter with the aim of focusing on the local myths and legends. She finds herself taken prisoner as the people in her home town insist there is a demon inside her.

Beautifully made the film has images and moments that are going to stay with me forever. For example one of the final shots in the film sent chills down my spine. It also has a chilly sound design that keeps the film chugging away.

The trouble for me is that all of the good bits don’t quite come together. I thought it was a little too abrupt getting into the film and I didn’t connect until a good way in. I also thought things were a little too bright to be scary. There wasn’t the proper creep factor for my tastes. I also have grown weary with any film that relies on jump scares.

But if I am quibbling with this film it is because while I like the film I wanted to love the film like I love the pieces. There is so much great here I wanted it all to be great. Regardless of it all there are some wondrous things that lovers of horror films should see.