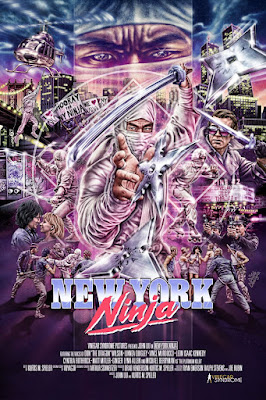 After his wife is killed by a bunch of kidnappers a man becomes a vigilant ninja to fight crime and get revenge on those responsible for his wife's death.

1984 lensed film as never finished. Over the last four decades the credits and audio track disappeared. Vinegar Syndrome purchased the footage and cut it together using lip readers to work out what the dialog was. The result is a film that feels completely like it as made in 1984. This is the sort of film that would have played at the bottom a triple feature on 42nd Street and in grindhouses across America. It would have developed a cult status when it hit VHS...

Seeing the film now its clear this is a film that should only be seen in a theater full of people who can make fun of it. Yea, this is a midnight film that could have been a martial arts ROCKY HORROR.

Its a film you you will laugh hysterically at. At the same time once you watch it, you'll never want to se it again- unless its to inflict it on friends. The performances are awful. The fights laughable and the costumes ridiculous.  While the film physically documents the bad old days of New York, there isn't much there beyond it. Taken on its on terms this is a turkey

Are you a bad movie lover? Then this is a must.  Beyond that you should only see it with like minded friends and lots of alcohol.