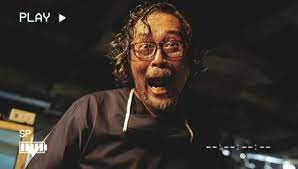 I’m in the minority and in that I don’t particular love VHS 94.  It’s not that the stories that make up the film are bad, rather the conceit of it all being period found footage films didn’t work for me.

The film is the story of a swat team making a raid on a cult. When they arrive at the location they find bodies in cages with their eyes pulled out. We then get three stories and a short commercial. The first story  is about a news crew covering a story about a rat man in the sewers. The second is about a woman having to watch a body in a funeral home in a rain storm. The Third is about a mad scientist. The fourth is a vampire story with a twinge of political shading. The film then returns to the swat team.

Okay full disclosure I am notoriously not a fan of found footage films, finding most of them fall down because the films almost always take liberties with the form, we see things we could never have seen or they are shot in a way that works for a film but would never be something anyone but a filmmaker would shoot.  I am always pulled out of the films as a result. However when the found footage films work, say in the Vicious Brothers GRAVE ENCOUNTERS or the recent Shudder film THE MEDIUM, they are absolutely terrifying.

Sadly VHS94 is not among the best. While having genuinely creepy moments and a few  scares I found the film never fully connected to me. Blame the conceit of the film being a series of found footage tapes inside a found footage tape. Blame the shooting style which aped the various video styles  but never nailed them. This is more apparent when you realize that the film is supposed to be from 1994. I was more aware of the technical issues of what I was seeing rather than being lost in the madness. It also didn’t help that the stories are uneven and have issues of their own.

I liked it but I would have been pissed if I hadn’t seen it as part of Shudder.

Worth a look, but your mileage will vary.